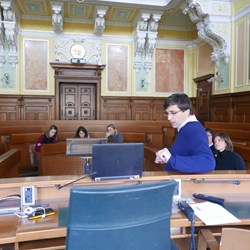 Co-lab hosted two prominent speakers. First, the participants were addressed by prof Luigi Corvo from the University Tor Vergata from Rome, who discussed the political and legal framework of the Italian SIBs. He presented SIB as a nice opportunity for Europe and called for the unification of rules in European Union. Secondly, Mr Julian Blake from the London’s Bates Wells Braithwaite talked about the implementation of SIB within the European regulatory framework. It was interesting to discover that despite the Great Britain is a pioneer of SIB, SIB developers still face several challenges in trying to implement one.

After the presentations representatives of Slovenia, Austria, Germany and Italy presented their findings about the possibilities, challenges and obstacles in SIB implementation and the discussion followed every presentation. It was acknowledged that all countries face similar problems, such as strict public procurement rules and the public fear of entering the private capital in the field of social services.

The second day was reserved for two workshops. In the first one participants tried to plan a concrete SIB for Slovenia, Italy and France in the field of physical activity and technology for seniors and the second one was dedicated to realisation of concrete ideas in the field of NEETs.

The co-lab happened in the already festive Ljubljana, which greeted all participants with impressive new year’s decoration and magical atmosphere.