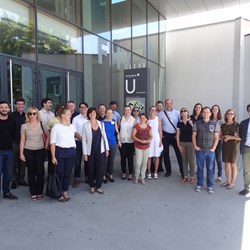 The AlpSib Austrian Partner from Dornbirn hosted the 2nd co-creative lab between 4th and 5th July 2017. The lab continued and further developed the SIB ideas set in Augsburg.

At the beginning Maria Chiara Pizzorno, representing the project partner Next Level, presented the social impact bond mechanism, highlighted the conditions for its implementation and its advantages. She explained that social impact investments are done with the intention to generate measurable social or environmental impact along with a financial return. She further concentrated on SIB and emphasised its advantages, among which the most important its user, early intervention and final results orientation, which strive for improvement of services.

Secondly, Matjaž Črnigoj and Damjan Kavaš from IER held a presentation on social impact measurement – methodology and methods. The main question they emphasised was: How to measure SIB? Answer to this question is still a matter of a debate.

Lastly, Juan David Rivera Acevedo from the University of Erfurt talked about the social return on investment and identified the key performance indicators through the theory of change.

The next morning sessions on NEETs and seniors continued under the supervision and leadership of Fahrudin Bajric and Knut Wuhler. The Augsburg stories continued with more precise ideas on how to develop SIB to address the needs of the two groups.