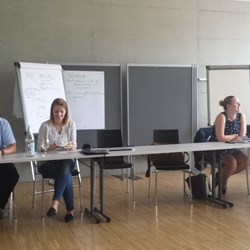 On the 13th June 2017 the Austrian engaging event took place in Dornbirn. It was organized by the Fachhochschule Vorarlberg.

Shrinking budgets and pressing social challenges demand social innovation. Social impact investment is an attractive alternative to more conventional approaches and it brings different stakeholders together. The Austrian government announced in the working programme 2013-2018 to promote innovative approaches within social policy to address the social challenges. Consequently, the first Social Impact Bond was launched 2015 in Austria as a pilot project.

The workshop started with an introduction of the AlpSib project and Social Impact Investment in general. Additionally, the situation in Vorarlberg in regards to NEETs and seniors was described. Here, it is interesting to emphasize that the share of NEETs with 13% is higher in Vorarlberg than the average in Austria and the EU-average. At the end, the AlpSib project was introduced and the possible involvement of the stakeholders was elaborated.

Afterwards, the first Social Impact Bond in Austria was introduced. The issue addressed is economic and social dependency of women affected by violence. Often these women see no other possibility than going back to their abuser, since they are financially and socially dependent on their abuser. That is why the Social Impact Bond was implemented and therefore, Perspektive:Arbeit (“prospect:employment”) was created, which helps women to find work and hopefully allows them to escape the abusive situation. Consequently, the objective of the SIB is to help women affected by violence to become financially independent through helping them to find a long-term job.

In the end, there was room for discussion and exchanging experiences about the current situation in Vorarlberg. The concept of SIB was rather new to the audience, but received with high interest and the wish to further stay informed, was expressed.