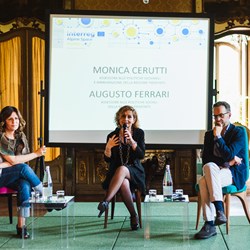 The second AlpSib engaging event was organised by the Next Level Association on 23rd May in Turin. It was entitled “Social Finance, an opportunity for Italy? International success stories or how other countries have risen to the challenge and come out on top."

In the premises of the Press Club 60 people gathered to discuss social impact investing. The interest in new form of investments that would support young people was confirmed by the presence of representatives from the public administration, the third sector as well as private investors.

The Regional Ministers Augusto Ferrari and Monica Cerutti, responsible for Social Policies and Immigration and Youth Policies respectively, opened the meeting and stayed till its closure, thus demonstrating a strong endorsement for the AlpSib project. The foreign speakers particularly raised considerable interest through their contributions. Social Finance closed the event outlining future prospects for impact investments.

The events proved to be a very successful one and the enthusiasm of the attendants was proved by numerous requests for involvement in future initiatives linked to the AlpSib project.