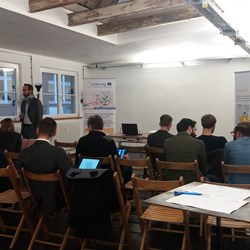 On November 10th 2017, bwcon teamed up with the network SocEntBW and Wizemann.Space in Stuttgart, Germany to present the AlpSib project. Speakers from the AlpSib Consortium shared the concept of Social Impact Bonds (SIBs) and engaged guests in the question of where a SIB could be used in a German setting. bwcon seized the opportunity to engage stakeholders providing content for the well-established format Social Impact Stammtisch (Social Impact Regular Meeting), which takes place every two months in Stuttgart. The event lasted three hours, from 4.30pm in the afternoon until 7.30pm. 29 guests from various backgrounds including companies, foundations, academics and social entrepreneurs attended.

Nina Schneider who works for Fachhochschule Voralberg, opened the evening by introducing the SIB methodology and showed common discussions and findings in current academic literature. She exemplified the findings with the case study of the First Austrian Social Impact Bond.

bwcon observer Ulrich Dobler, Stiftung Liebenau, a foundation specialised in the care of elderly and unemployed youth, explained the chances and objectives of SIBs, in particular in the German setting. Stiftung Liebenau has already been engaged in the early discussions around SIBs in 2013 contributing to the National Advisory Board on SIBs in Germany.

Lastly, Sina Speer from bwcon, invited guests to join the Interreg Project D-STIR, to learn about the new STIR method.

Guests were curious whether intermediaries have already been established and how contracts work. Some guests were however critical whether SIBs undermine social services by the state and whether the evaluation for a SIB would be too costly.

Lastly, guests were invited to find out more on the AlpSib website and to join the Social Innovation Summit in March 2018, where AlpSib is hosting a workshop to match investors and ideas to bring about potential new SIBs.