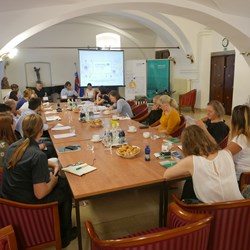 Slovenia was the last country to host the engaging event and it concluded the series of events with the event held in Ljubljana on 12th July 2017, organised jointly by the RRA LUR and IER.
The event took place in the City Hall and was attended by the representatives of the public service (ministry, municipalities, social service providers), various institutes and non-governmental organisations. The event was organised mainly with the aim to present the SIB to the interested public and to discuss the possibility of the connection between the public, private and third sector in Slovenia.

The event was kicked with the greeting words delivered by the director of the Regional Development Agency of the Ljubljana Urban Region, Lilijana Madjar, MSc, followed by the presentation of the AlpSib project, made by Damjan Kavaš, PhD from the IER.

The main lecture of the event was given by Gregor Sakovič, MSc, the head of the Innovative Entrepreneurship Centre at the NLB Bank. He discussed the social impact investments and the impact measurement. His lecture was complemented by the lecture given by Matjaž Črnigoj, PhD, who concentrated purely on SIB.

A lively debate with several questions posed and opinions expressed followed. Many doubts regarding the weakening of the welfare state appeared. However, the participants expressed their interest in attending future similar events.