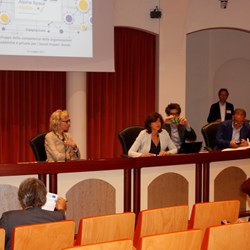 The AlpSib Engaging Event, organized by the Municipality of Pordenone on 31st May 2017, hosted representatives of the Friuli Venezia Giulia Region, as well as experts on social finance, among which Human Foundation ONLUS, Federsanità ANCI and Social Finance UK, the latest being the main international representative on Social Impact Bonds.

At the meeting, attended by about 60 participants, various examples of performance based contracting and financial obligations (in terms of social interests) were presented. Those deal with a sharing participation between public and private institutions, namely public administrations, intermediates, private investors, assessors, social providers and beneficiaries.

Speakers also discussed the history of the SIB. The first SIB was launched in 2010 in the United Kingdom with the aim to develop a project addressing prison recidivism and involved about 3.000 prisoners of Peterborough prison.

Furthermore, the SIB legal conditions and instruments have been analyzed during the meeting, taking the first (and other successive successful SIBs) as an example. Two typologies of future collaboration for the development of SIB projects in Italy were defined: shared planning with and reception of project ideas from social providers. It was also noted that SIBs have the purpose of providing ad hoc services related to social needs. Those services are based on volunteering and on risk sharing between public and private, with policies that demarcate the difference between innovation and investment.